Posted by BiXPower on 9/19/2010 to Tech Info
Some power inverters use a modified sine wave instead of a pure sine wave. This modified power wave is not exactly the same as electricity from the power grid, and appears as a choppy squared-off wave when viewed through an oscilloscope. The voltage fluctuates with this type of inverter and may cause difficulties running sensitive electronic equipment. You may notice that digital clocks lose time, the picture appears wavy on screens, and motors run roughly; these are indications that you require a pure sine wave inverter. 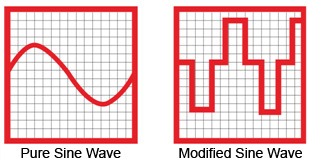