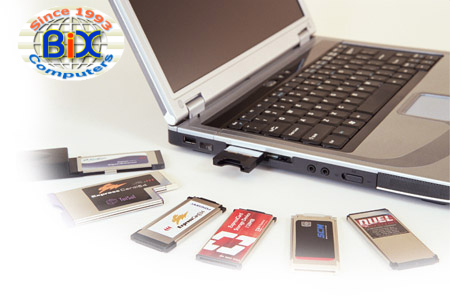 What is the difference between "PC Card" and "PCMCIA"?

The term "PC Card" referes to the credit card-size peripherals that add memory, mass storage, and I/O capabilities to computers in a rugged, compact form factor. The term "PCMCIA" (Personal Computer Memory Card International Association) refers to the non-profit trade association and standards body that promotes PC Card and ExpressCard technology by defining technical standards and educating the market. In the past, cards were known as "PCMCIA Cards", but the industry now refers to products based on the technology as "PC Cards," "PC Card Hosts" and "PC Card Software," and refers only to the association as PCMCIA.

PCMCIA stands for Personal Computer Memory Card International Association, the group of industry-leading companies that defines and develops the standard. While this acronym did clearly describe the original intentions of the organization's standard, it was difficult to say and remember, and was sometimes jokingly referred to as "People Can't Memorize Computer Industry Acronyms".[1] To aid in the widespread marketing and branding of the standard, and to account for the standard's widening scope (beyond just memory cards), the association acquired the rights to the simpler term "PC Card" from IBM, and began using it, rather than "PCMCIA", from version 2 of the specification onwards.

All PC Card devices use an identical 68 pin dual row connecting interface. All are 85.6 mm long and 54.0 mm wide. This is the same size as a credit card. The form factor is also used by the Common Interface form of Conditional Access Modules for DVB broadcasts.

Type I: Cards designed to the original specification (version 1.x) are type I and feature a 16-bit interface. They are 3.3 mm thick. Type-I PC Card devices are typically used for memory devices such as RAM, flash memory, OTP, and SRAM cards.

Type II: Type-II PC Card devices feature a 16- or 32-bit interface. They are 5.0 mm thick. Type-II cards introduced I/O support, allowing devices to attach an array of peripherals or to provide connectors/slots to interfaces for which the host computer had no built-in support. For example, many modem, network and TV cards use this form factor. Due to their thinness, most Type II interface cards feature miniature interface connectors on the card which are used together with a dongle; a short cable that adapts from the card's miniature connector to an external full-size connector.

Type III: Type-III PC Card devices are 16-bit or 32-bit. These cards are 10.5 mm thick, allowing them to accommodate devices with components that would not fit type I or type II height. Examples are hard disk drive cards, and interface cards with full-size connectors that do not require dongles (as is commonly required with type II interface cards).

CardBus are PCMCIA 5.0 or later (JEIDA 4.2 or later) 32-bit PCMCIA devices, introduced in 1995 and present in laptops from late 1997 onward. CardBus is effectively a 32-bit, 33 MHz PCI bus in the PC Card form factor. CardBus includes bus mastering, which allows a controller on the bus to talk to other devices or memory without going through the CPU. Many chipsets are available for both PCI and CardBus, such as those that support Wi-Fi.

The notch on the left hand front of the device is slightly shallower on a CardBus device, so a 32-bit device cannot be plugged into a slot that can only accept 16-bit devices. Most new slots are compatible with both CardBus and the original 16-bit PC Card devices.

How can I tell if I have a CardBus card?

When viewing the PC Card right side up, the area above the 68-pin connector on a CardBus card will have a gold grounding shield strip across it, typically with 8 small metal bumps (see photo below). This strip is necessary to prevent signal noise from interfering with CardBus' high speed (33 Mhz) bus. These CardBus cards can only be used with CardBus slots -- they are keyed to prevent insertion into 16-bit slots so that the card and the slot won't be damaged by differing voltage requirements. 16-bit cards work in either type of slot, but CardBus cards only work in CardBus slots.

How can I tell if I have a CardBus slot?

The CardBus specification was released in 1995. Typically, any device manufactured before the second half of 1997 will almost certainly not have a CardBus capable slot.

ExpressCard is a hardware standard replacing PC cards (also known as PCMCIA cards), both developed by the Personal Computer Memory Card International Association (PCMCIA). The host device supports both PCI Express and USB 2.0 connectivity through the ExpressCard slot, and each card uses whichever the designer feels most appropriate to the task. The cards are hot-pluggable.

ExpressCard supports two form factors, ExpressCard/34 (34 mm wide) and ExpressCard/54 (54 mm wide, in an L-shape) — the connector is the same on both (width 34 mm). Standard cards are 75 mm long (10.6 mm shorter than CardBus) and 5 mm thick, but may be thicker on sections that extend outside the standard form factor — for antennas, sockets, etc. The 34 mm form factor cards fit into both 34 mm and 54 mm card slots via a diagonal guide in the rear of the 54 mm slot that guides the card to the connector. The 54 mm card will only fit in a 54 mm slot.

The major benefit of ExpressCard technology over the previous PCMCIA CardBus PC card is a dramatic increase in bandwidth, afforded by the fact that the ExpressCard has a direct connection to the system bus over a PCI Express x1 lane and USB 2.0, whereas CardBus utilizes an interface controller that only interfaces with PCI. The ExpressCard has a maximum throughput of 2.5 Gbit/s through PCI Express and 480 Mbit/s through USB 2.0 dedicated for each slot, versus CardBus's shared 1.04 Gbit/s bandwidth.

In addition, the ExpressCard standard uses lower voltages than the previous CardBus slots (1.5V and 3.3V versus 3.3V and 5.0V).

The ExpressCard FAQ also claims other advantages, including lower cost, better scalability, and better integration with motherboard chipset technology. The ExpressCard interface is not backwards-compatible with CardBus devices, which presents a problem for those who may purchase a new system only to find that their devices do not work with the new slot design.

ExpressCard has become quite prominent on most new or high-end laptops made since 2006.

Hewlett-Packard began shipping systems with ExpressCard in November of 2004, [1] and Lenovo integrated the slot into their flagship ThinkPad T43 in May 2005. [2] Dell Computer also incorporates this in their Precision (the 17" models have them exclusively, the 15" Precisions have both express card and PCMCIA Card slots), Inspiron, Latitude (Latitude D-series have PCMCIA card slots. The D820/D830 have both express card and PCMCIA card slots), Vostro and XPS Laptop product lines. Fujitsu-Siemens began shipping systems [3] with ExpressCard in mid 2005. Apple Inc. included a single ExpressCard/34 slot in their MacBook Pro notebook computer in January 2006. ASUS has also replaced the PC Card slot with an ExpressCard slot on many of its new models. Sony also began shipping systems [4] with ExpressCard with its new laptop VGN-SZ product line. The Acer Aspire laptop series also has a single ExpressCard/34 slot. Panasonic incorporates ExpressCard/54 slots in all the fully rugged and semi-rugged models of their Toughbook brand of portable computers. Gateway notebooks (ML3109 and later) also ship with ExpressCard 54 interfaces.

Because of the lack of backward compatibility, some laptop manufacturers have chosen to release models incorporating both CardBus (PCMCIA, PC Card) and ExpressCard slots. These include certain models of Acer Aspire, Dell Latitude, MSI S42x and Lenovo ThinkPad Z60m and T60.
TOP
0 Items